Monday to Sunday
Dawn to dusk

In 1945, Dame Hilda became the first Hamilton woman to be elected to Parliament and five years later just the second woman in New Zealand to be made a cabinet minister. She was also Deputy Mayor of Hamilton in 1945.

Dame Hilda was an energetic representative, working particularly hard to advance the health and welfare of women and children during her 14 years as an MP. Her long history of community service began before she was elected and included volunteer teaching and co-founding health camps for Waikato children.

The bronze sculpture of Dame Hilda, on the corner of Garden Place is the culmination of eight years of effort by charitable trust TOTI (Theatre of the Impossible), which is giving the statue to Hamiltonians.

The trust focuses on projects that commemorate Hamilton’s history through art and has previously gifted statues of Sapper Horace Moore-Jones and a World War 1 war horse to the city.

“She was passionate about improving education and wellbeing, making sure children were eating properly through food in schools programmes, reducing violence against women and children, healthy living and resolving poverty.”

Ms Evans said Dame Hilda was also a fighter for women’s rights and challenged the political attitudes of the day. Dame Hilda herself said her election to the Hamilton Borough Council in 1944 was “sacrilege” for her male colleagues.

The trust chose October for the public unveiling because this month marks the anniversary of the Women’s Parliamentary Rights Act, which gave women the right to stand for Parliament. The statue shows Dame Hilda holding a copy of the Act, which was passed on 29 October 1919.

Dame Hilda died in 1959. An estimated 10,000 people lined the streets of Hamilton on the day of her funeral and huge crowds visited her gravesite.

Ms Evans said Dame Hilda would be delighted with the number of women in Parliament today but probably not surprised.

“She had great confidence in the ability of women to get on and get things done and to ably hold positions previously reserved for men. The fact today’s Prime Minister and Leader of the Opposition are both women and that over half the country’s new MPs are women – a new record – would have thrilled her.”

The statue of Dame Hilda Ross was sculpted by artist Matt Gauldie, who also created the war horse and Sapper Moore-Jones artworks. Mr Gauldie’s design was chosen by the public.

Ms Evans said Dame Hilda was known for her sense of style, so “the artist has her in remarkable shoes”.

Hamilton Mayor Paula Southgate, who spoke at today’s unveiling, said Dame Hilda was an “inspirational and courageous leader” whose focus was on issues of social justice, fairness and equity.

“She paved the way for a great many women to actively enter politics and, personally, I am grateful for that. She was both tough and compassionate and her work has made our city and New Zealand a better and more inclusive place.”

The new statue was unveiled during a celebration that also included speeches from former MPs Dame Marilyn Waring and Georgina Beyer and Massey University Associate Professor Jenny Coleman, who is writing a book based on women MPs’ maiden speeches.

The statue, sculpted by Otaki artist Matt Gauldie, portrays Dame Hilda in Parliament, with one hand holding a copy of the 1919 Act which finally allowed women to become MPs, while the other is raised, advocating on behalf of women and children, whose welfare she considered her principal concern. 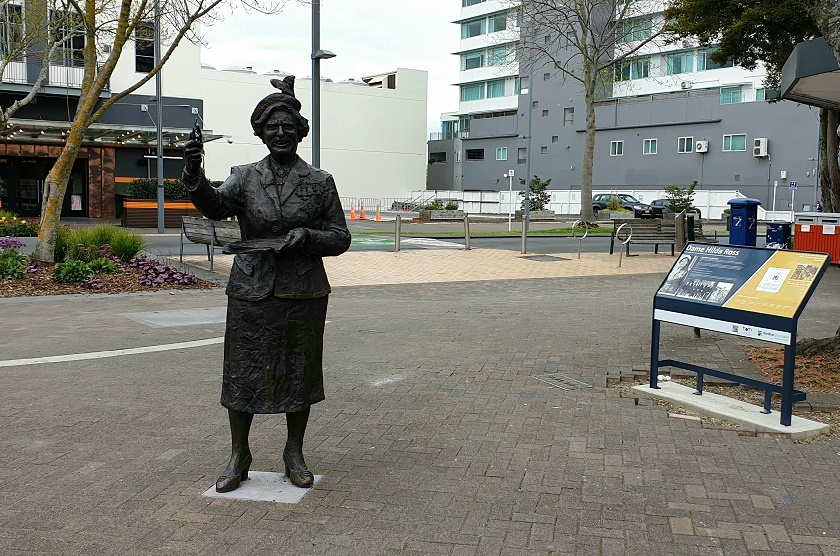