Printmaker Ruth Davey is one of Waikato’s leading artists. Davey’s works are ethereal, expressive, and engaging. They filter international trends through local soils to create works that simultaneously celebrate the Hamilton-ness at the heart of the city, while showing us how to see ourselves within a global network of culture. They are both poignantly local, and engaged in an international dialogue with music, literature, and the craft of printmaking itself.

Davey moved to Hamilton in 1960 where she soon became a central figure in arts and culture for the region. Waikato Museum Te Whare Taonga has recently acquired many of the works in this exhibition, which span the entirety of Davey’s artistic career. 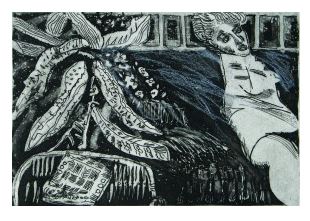