The Howard Morrison Quartet is considered this country’s’ most successful show band who helped to create the New Zealand entertainment industry. Merging family-friendly music with unique New Zealand humour, they toured constantly during the 50’s and 60’s but reformed regularly throughout the subsequent decades to remain hugely popular. Its charismatic lead singer, the iconic Sir Howard Morrison also enjoyed a stellar solo career over many decades plus the love and respect of his country for the huge amount he gave back to the community.

All outstanding performers, Howard Morrison Jnr, Russell Harrison and Chris Powley have toured successfully as a trio for many years, but now joined by singing comedian, Andre King, The Howard Morrison Quartet Take Two will faithfully recreate a trip down memory lane for the followers of the original showband plus add some new songs and magic of their own. Suitable for all ages. 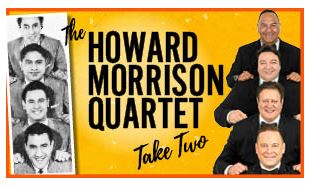