This is a story you may think you know; a grand classic born on the backs of gods and warriors. But this wouldn't be a New Zealand performance without a little twist.

New Zealand’s own master storyteller, Michael Hurst, gives a towering performance in a passionate and exciting reimagining of Homer’s influential work, written by the genius coupling of Lisa Peterson and Tony award-winning Denis O’Hare. Our poet is joined on stage by rock luminary Shayne P Carter (Straitjacket Fits, Dimmer), performing an emotive real-time soundscape live on stage. Riffing off each other, the two create an enthralling modern take on one of the greatest stories ever told.

An Iliad was first a box-office hit in the US. This production won three major awards for sound design, performance, and production of the year at the 2018 Dunedin Theatre Awards. Auckland, Taranaki and Hawkes Bay critics and audiences raved and raved. Finally, this award-winning classic is coming to Hamilton for just one performance.

Experience the passion and darkness of this spine-tingling tale depicted by two great kiwi legends. Described as part play and part gig, you'll leave with a new respect for the legend and the feeling that you've just had a damn good night at the pub.

By Lisa Peterson and Denis O'Hare. Based on Homer's The Iliad and translated by Robert Fagles. Directed by Jonathon Hendry and produced by Amy Mansfield. Lighting design by Rachel Marlow. By arrangement with Hal Leonard Australia Pty Ltd, on behalf of Dramatists Play Service, Inc New York. 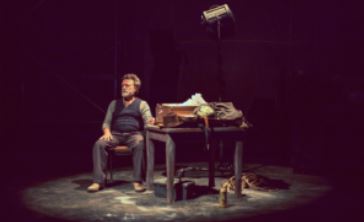