Friends – The Musical Parody have today announced that they are postponing their near sold out 2020 tour & have secured new dates for 2021 and added extra shows due to demand. All tickets remain valid for the new dates.

Current Covid-19 restrictions have meant that the tour can’t proceed as planned. Producers apologise for any inconvenience this has caused as they know how much people were really looking for to attending the performances.

The tour will now take place in September and October 2021. Patrons don’t need to do anything. Please hold onto your tickets as they remain valid for the new dates and nearer the time venues will send out an email to ticket holders with any further updates.

So, no one told you life was gonna be this way, nor did they tell you about the hilarious new musical that lovingly lampoons one of TV’s all-time greatest shows in the hit New York and Las Vegas show Friends! The Musical Parody.

Friends! The Musical Parody will be there for you in 2020 as it tours New Zealand for the first time. I mean, isn’t that just kick-you-in-the-crotch-spit-on-your-neck fantastic?

Friends! The Musical Parody takes a hilarious look and remembers the TV phenomenon that ruled the 90s and became a cultural institution with millions of fans across the globe. Like the original television series, Friends! The Musical Parody follows the lives of six wacky 20-somethings and goes back in time to celebrate and poke fun at some of their most iconic moments as they navigate the pitfalls of work, life, and love in 1990’s Manhattan. 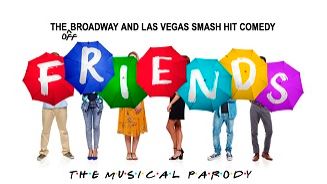