Originally set in 1960’s Liverpool, the show “Blood Brothers” is now regarded as one of the all time great British musicals. It has touched the hearts and minds of a generation of theatregoers in dealing with two of the most pressing social issues of our time - inequality and unemployment. Born into poverty, likeable Mickey is brought up with his seven older siblings by his struggling single mother, Mrs Johnstone. His twin brother, the more innocent Edward however,  is raised as the only child of the wealthy Lyons family, who live nearby, after the manipulative Mrs Lyons persuades Mrs Johnstone to hand over one of her twins at birth. Mickey and Edward don’t actually meet each other until they’re seven years old, but they immediately become best friends and ‘blood brothers’. The bond continues throughout their teenage years despite family disapproval and them both falling in love with Mickey’s neighbour Linda. However, as they progressively age, the huge difference in their backgrounds tears them apart and eventually leads to their tragic deaths.

Written by Willy Russell during a period of huge changes in society and politics, “Blood Brothers” draws the audience’s attention to the detrimental effect that social inequality can have on people’s lives. 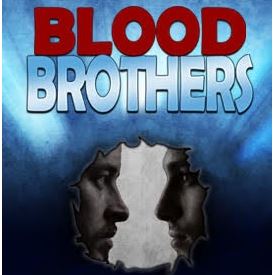